The semi-finals for the Euro-Toques ‘Young Chef of the Year 2018’ was on Monday 3rd September with fourteen young chefs attending the event at Dublin Cookery School of Blackrock, with the hopes of making the top six to compete in the finals. 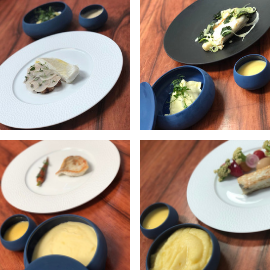 The fourteen young hopefuls were given a task of creating a unique dish from a whole turbot supplied by Kish Fish and pommes mousseline where they were given only a ‘mystery basket’of Ingredients from La Rousse Food and no recipe supplied. They also had a recipe for beurre blanc and were asked to incorporate a vegetable garnish to their dish. Incorporating the chef’s key eye for presentation, ourselves at Hugh Jordan provided the young hopefuls with plates and bowls by Degrenne to help narrate their stunning creations which resulted in some beautiful designs and displays. 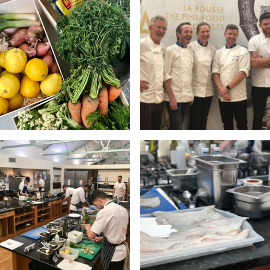 Chef Domini Kemp assessed the fourteen chefs during their two-hour kitchen skills test with the semi-finalists also being asked to present the judges with two plates of their chosen dish. In this segment of the competition, the competitors were tested on their workspace practice, executions and the taste and presentation of their end result. The finished dish would then be presented and assessed by guest judge Tom Brown of Cornerstone Restaurant in London, alongside Irish Chefs Kevin Thornton, Wade Murphy & Gareth Mullins.

The whole competition was a huge test for these chefs as it really put to practice the many skills they have learnt throughout their years cooking, such as their knife skills, testing their palate, their ability to plate and present and also their creativity.

After much deliberation, it was then revealed that the six chefs that made their way to the finals would be; Attila Galambos (mentored by JP McMahon of Aniar); Jack Lenards (Ahmet Dede, Mews); Jason Nolan (Robert McCauley, Gregan’s Castle); Matthew Stafford (Kevin Aherne, Sage); Glen Sutcliffe (Eric Matthews, Chapter One), and Michael Morrisroe (James Kavanagh, The Strawberry Tree). The finalists will now move forward to the next stage of the competition and will take part in many educational, training and networking programmes on the run up to the final in November.

For more information on the competition why not check out www.euro-toques.ie or visit their Twitter now to keep up to date with the latest news and updates on the run up to the competition. If you are interested in purchasing the products that featured in this year’s semi-finals, why not contact us here at Hugh Jordan via Twitter or Facebook or Shop online at www.hughjordan.com